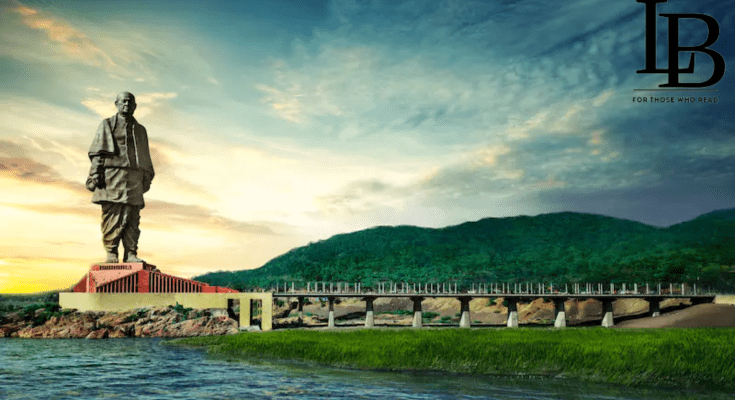 The statue is located on the Sadhu Bet river island. Vadodara, located 95 kilometres from the Statue of Unity, is the closest city. The statue is being erected with the hope that it would inspire others to share Patel’s ideas and sense of patriotism while also serving as a constant reminder of our great nation’s struggle for freedom.

Anecdotes regarding the Statue of Unity:

On October 7, 2013, to begin his tenth year as Gujarat’s chief minister, Narendra Modi unveiled the initiative.

Under the direction of the Gujarat Chief Minister, a society called the Sardar Vallabhbhai Patel Rashtriya Ekta Trust (SVPRET) was established to carry out the project.

The Statue of Unity Movement was founded in 2013 to persuade farmers to donate their used farming equipment in order to raise the iron needed for the statue.

By 2016, 135 metric tonnes of scrap iron had been gathered; after processing, around 109 tonnes of that amount were used to create the statue’s foundation.

On December 15, 2013, Surat and Vadodara hosted the Run For Unity marathon in support of the initiative.

A group of historians, artists, and scholars looked at Patel statues all around the nation before settling on a concept created by Indian sculptor Ram V. Sutar. A statue of the statesman that was erected at Ahmedabad International Airport is replicated in scale in The Statue of Unity. Ram Sutar’s son, Anil Sutar, comments on the design and says, “His personality oozes dignity, confidence, an iron will, and kindness, all of which are justified by his expression, posture, and attitude. He appears to be getting ready to walk because his head is up, scarf is flung from his shoulders, and hands are to the side “. The design was first constructed as three versions, each measuring 3 feet (0.91 m), 18 feet (5.5 m), and 30 feet (9.1 m).

The solidity of the design was hampered by Patel’s dhoti-clad legs and sandals, which made the base thinner than the top. This was countered by keeping a slenderness ratio of 16:19 as opposed to other tall buildings’ typical 8:14 ratio.  The statue is designed to withstand winds up to 180 km/h (110 mph) and earthquakes measuring 6.5 on the Richter scale that occurs within 12 km of the statue and at a depth of 10 km. Two tuned mass dampers totalling 250 tonnes are used to help achieve maximum stability in this.

A Public Private Partnership was used to construct the Statue of Unity, with the Government of Gujarat providing the majority of the funding. In its budget from 2012 to 2015, the Gujarat state government allocated 500 crores (equivalent to 641 crores or US$80 million in 2020) for the project. The statue’s construction was funded with 200 crores (about 272 crores or US$34 million in 2020) from the 2014–15 Union Budget. Public sector organisations made contributions as well as the Corporate Social Responsibility programme.

Since it opened on November 1, 2018, the statue of unity has seen over 128,000 visitors in just 11 days. Every Monday, the statue is closed for maintenance. The monument’s entrance hours are 9 AM to 5 PM. For adults and children, respectively, the entrance fee to the Statue of Unity is Rs 120 and Rs 60.

The construction of this monument was made possible by the equipment donations of thousands of Indian farmers from all throughout the country. To complete the statue on time, more than 2500 employees including 100 migrant workers from China were hired. According to government estimates, the statue will annually create about 15,000 jobs for residents of the area. The Gujarat tourism agency has authorised online booking for not only admission to the monument site but also for travel packages that include lodging in tent homes in an effort to draw tourists.

Tent City Narmada, an opulent nature retreat beside Panchmuli Lake, has opened for tourists and is within ten minute drive from the Statue of Unity. Because tour guides, vendors, and other service providers will be necessary, thousands of people now have the tools to support themselves. Overall, it is advantageous to everyone. The statue of unity is the best illustration for those who doubt India’s existence.